Ben O’Brien, or perhaps known better to you as Ben the Illustrator, based in Cornwall in the UK, has a background including animating and directing music videos for labels including Sony Japan and Domino Records and editorial illustration for clients including The Guardian and Computer Arts Magazine. He has also worked on advertising campaigns for clients including Smart Cars and Honda.

He has dropped his pencils, paper and Wacom pen to talk to us, with his wife Fi, about his new luscious ‘patternscapes’ in some detail.

What made you decide to get into this pattern series?

It was a funny bit of progression while creating a few different illustrations.  I’d been playing with a few different ways of putting together a landscape, by making everything into graphic shapes and taking it a little further than normal, that ended up being a piece of artwork we released last year as an art print called ‘Asleep On A Sunbeam’.  And then I was thinking about how I could lose the horizon, and just take that part of land, and pretty much repeat it to fill a page.  Since there wasn’t really any perspective on the landscape, things didn’t get smaller in the distance so I thought the landscape could go on forever. So I took that idea and painstakingly drew out a landscape, with no perspective, that could go on forever.  That drawing was full of mountains and went on to be ‘Feelgood By Numbers’ another art print from last year.

Not long after we released that print Fi, my wife and partner in all things creative and business, started conceptualising fabrics and other homewares products using ‘Feelgood’ as the starting point.  So then it all rolled on, I developed ‘Feelgood’ into a pattern tile that could repeat forever, to be fabric printed and the rest has rolled on from there!  We’re calling them ‘Patternscapes’.

What is your work process for the patterns and what tools etc do you use?

I always start on paper, just drawing everything in full, exactly as I visualise it, but just pencil and paper, no colour: 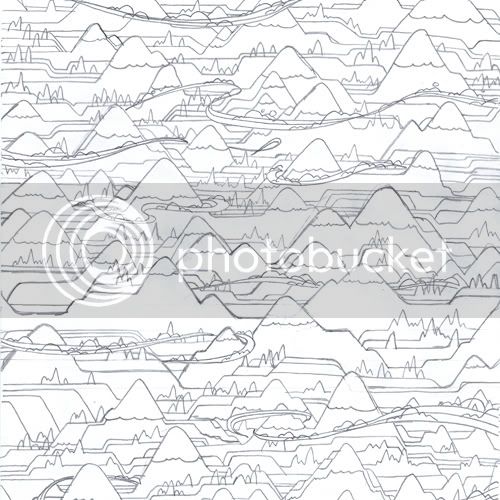 Then I scan my drawing and take it into Adobe Illustrator, and using my Wacom tablet, my weapon of choice, I trace the illustration and do all the colours. If I’m making it into a perfect repeatable pattern tile, then I have to do a lot of measuring on-screen and ‘trial and error’ work until it works:

I’m sure there’s an easy formula for making perfect repeating patterns easily, something that textile designers swear by, but as yet I don’t know it!  I’m still learning about producing patterns, and also the textile processes, I’ll let you know when I work it all out!

MoonApe: I have a link to a useful seamless pattern tutorial courtesy of iStockPhoto designer YBMEdia.

What materials are the patterns going on (and in future)?

I might hand over to Fi for this one… “When I start to think of how far we can take the patternscapes I hyperventilate with excitement of the possiblities! Obviously fabric is a perfect match for the Patternscape illustrations as the colours and shapes add a beautiful visual texture to the fabric making it perfect for cushions, bed linen, bags etc… Other areas we would like to explore are other homeware products such as lampshades, melamine wares, tiles, wallpaper and ceramics, but further afield I think there is a real scope to take the patternscapes into fashion with pieces such as contrasting, vibrant lining on coats and jackets through to accessories like scarves, caps and gloves.

We also have a real interest in extending the patternscapes into the childrens area with super cool wooden toys, wall stickers, blankets etc.  So as you can see its limitless and everyday I have a lightbulb light up above my head with new and exciting places to stamp the patternscapes on, so watch this space!”

What is in store for your work next in general?

Well, there’s quite a lot coming together at the moment.  I’ve been working on a children’s book with a writer, so I’m illustrating that at the moment but it’s still really early days and there’s a lot of work ahead but it’s a great story and we’ve got some good characters, as schedules go it wouldn’t be near publishing until next year, maybe even 2011!

We’re also working on an exhibition in London with some other illustrators and artists, but that’s very hush-hush for now, no details yet I’m afraid!  This year we’ll be releasing two sets of art prints, one of which will be entirely pattern-based artwork, we’re also releasing our first set of cushions and fabrics pretty soon, all using patternscapes, all very exciting!  Particular projects aside, I don’t really know what’s in store for my work, just keep on evolving, keep on developing and keep on enjoying it!

Please Digg or Stumble this.