Joseph Lambert is one hard-working cartoonist and illustrator with a great, well developed style. I’m particularly keen on his self-made comics and the techniques and tools he uses to create his addictive work. I asked him a few questions to find out about all this in greater detail.

How did you get into cartooning and illustration?

I’ve been interested in comics and art for as long as I can remember. I’ve always had a strong urge to want to create what I liked so I started drawing pretty early on. I really had no other aptitudes, so while all of my classmates were out playing sports I was inside drawing.

What is your typical process of work and the tools you use?

I draw out most things, both comics and illustrations, with a pencil first. An ordinary mechanical pencil. Then I’ll go over the pencils with ink. I go back and forth between lots of different tools to keep myself interested but the most common tools I use are G-nibs with Winsor & Newton Indian Ink (usually diluted a tiny bit), or a brush with the same ink. Most often I use a Pentel Pocket Brush though. That’s the thing I always have with me, it’s the most versatile.

With both illustrations and comics I tend to doodle the visual elements in my sketchbook for a bit before tackling the main piece. For comics I will thumbnail the story pages with colored ball point pens (to keep the information organized) and then I’ll spend a couple of pages doodling the characters to really nail their specifics. It’s mostly the same with illustrations, thumbnailing the compositions until I get it right, and then sketching the visual elements several times in my sketchbook. 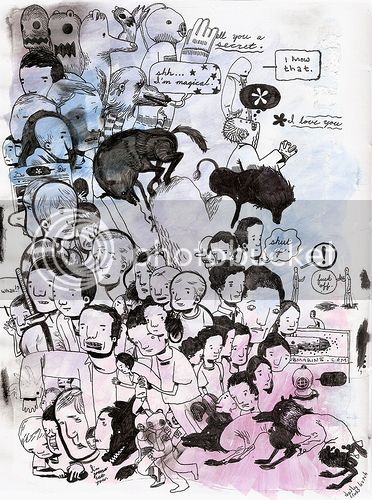 I think, for me, this sketchbook process is the most important because it gives me confidence for when I tackle the final page and it keeps me loose. Otherwise I would be really tight and nervous and the drawings would look stiff and dead. I feel like keeping loose and calm helps allow spontaneity and suprises to happen in the drawing process, which is always fruitful and fun.

A lot of your work appears destined for print, including through your own press. What advice do you have for those illustrators that want to work for printed material?

Colors never look the same in print as they do on the screen. Absolutely never. But most of the time it’s okay, as long as you’re ready for it. It’s hard to visualize what something will look like in print when working on the computer, so I try to make sure the compositions are strong enough to hold up the image even if the colors change a little bit.

A helpful way to understand compositions and balance is to work with fewer colors. It’s a fun challenge and I really like the way it looks. I almost always end up getting rid of a few colors when I’m two thirds of a way through an illustration because I often get carried way in the beginning. It’s refreshing to see the image in such a stripped down way, and then I can build it back up with that fresh perspective.

I don’t really know too much about materials for printing. I self-publish most of my comics and those are almost always printed on cheap copy paper. But I do like to use French Paper for my covers. They’re very good. Great quality and pretty colors.

I usually don’t like glossy paper. Sometimes it works, but I think most people probably choose it because they think it always looks good, and it doesn’t, in my opinion.

Is it easy to get set up making and printing your own comics?

I think so. I was never exposed to self-publishing until I became a student at The Center for Cartoon Studies. Often our homework was to be in the form of multiple-paged comics so we ended up making a lot of mini-comics and we were to make enough copies so that each person in our class could have their own. And that was the beginning for me. It was easy to get started because I had to. I have a hard time keeping things in print though, I keep running out of copies of my books.

What is in the pipeline at the moment?

I’m finishing up a collection of comics. That will be published by Secret Acres, and will probably come out sometime around November of 2009. I’m working on a biography of Helen Keller. It’s part of the series of comic biographies that Hyperion Publishing has put out in partnership with The Center for Cartoon Studies. I don’t know when that is coming out, but it should be finished this winter. And I’m going to start a few stories for inclusion in the Fantagraphics comics anthology Mome.

Are there any illustrators out there who are working on or planning on creating their own comics? It would be nice to hear comments from you.

Thanks for your interesting insight, Joe.